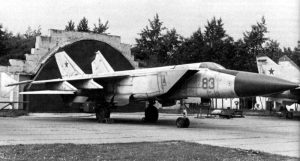 RP-SA / RP-25 / Smerch-A / Izdeliye 720 was first introduced into service on the improved Tu-128A model. This improved Smerch design was used as the basis of the MiG-25’s RP-25 radar. It weighed 500kg. The Smerch-A1 as fitted to the MiG-25 prototypes introduced a second, secret operating wavelength of 2cm in addition to the standard 3cm to ensure the radar would function even in a heavy ECM environment. Smerch-A1 could detect a bomber at 100km, with tracking range remaining unchanged at 50km. By the time it entered production, improvements in jamming resistance and low-level clutter tolerance had been achieved. Smerch-A2 / Izdeliye 720M gave improved reliability, and was the standard radar, and Smerch-A3 more improvements, which were fitted to later model MiG-25Ps as they rolled off the production line. Smerch-A4 was presented for testing, featuring a rudimentary look-down capability, but by this time the sucessful deployment of the Sapfir-23 radar with a different method of clutter rejection that was rather more successful made the Smerch family redundant. The subsequent defection of Viktor Belenko with a MiG-25P compromised the secrets of the Smerch-A radar and ensured its rapid withdrawal from Soviet service, though refurbished sets were fitted to new build MiG-25PDs for export.

Was the final iteration of the Smerch design used on the Tu-128M. Smerch-M reduced the weapons system’s minimum combat altitude from 8,000-10,000 m down to 500-1,500 m while enhancing its jamming resistance. Probably equivalent to Smerch-A2/A3.

Smerch-100 was a late sixties design for the MiG-25MP (later MiG-31) and advanced Tupolev interceptors. Its designers, Phazotron NIIR, made extravagant claims for its performance. It was to be a combined radar/infrared fire control system. The Smerch-100 FCS comprised an FMICW phased array radar (PAR) based on the Sapfir-23 technical base with a huge 2m antenna dish, an infrared target acquisition and tracking system mated with the radar, a digital computer and additional side-view radar antennae. The Smerch-100 developer promised to provide the system with a 3,000-3,500km head-on acquisition range for aerial targets similar to the Tu-16, 600km lateral scanning acquisition range as well as 100km infrared acquisition range. The Smerch-100 system was supposed to ensure launching and guiding the air-to-air missiles at a range of 250 km when attacking targets head on. Such a radar would enable a single interceptor to keep tabs on a vast sector of the aerospace and be to some extent used as a AWACS aircraft in support of the local air defence zone and other interceptors.

Plans for the first stage of development provided for outfitting the interceptor with K-100 combined infrared/radar homing missiles featuring various warheads and an effective range of 80 km. In the future, there could be transition to longer-range air-to-air missiles since the Smerch-100 was capable of handling them. The Smerch-100 fire control system was expected to have full lookdown capability, encompassing the destruction of targets travelling at a speed of 500- 4,500km/h at altitudes between 50m and 35,000m. A joint automatic data exchange system for receiving data on various targets and commands from command posts and transferring it to other aircraft was also part of the design. Two prototype radars designated Groza and Vikhr were produced, but were not successful in tests. NIIR had failed to solve the two problems of detecting small objects against ground clutter, and tracking multiple targets simultaneously. Given the state of digital technology in the USSR at the time such a radar was far beyond the realms of possibility. Indeed even today it would be a tall order. All documentation for the project was passed over to NIIP. The far more realistic NIIP Zaslon project officially replaced the Smerch-100 in 1971, eventually entering service in 1983.