Based on the work undertaken by NPO Istok on the experimental Soyuz radar program, Phazotron NIIR were tasked in the mid 70s with producing a modern radar for the MiG-29. Originally intended to have a planar array antenna and digital signal processing, and a range of at least 100km against a fighter target, it soon became clear that this would not be achievable, at least not in a radar that would fit in the MiG-29’s nose. Phazotron NIIR reverted to a version of the twist cassegrain antenna used successfully on the Sapfir-23ML, and analogue signal processor technologies similar to their earlier designs, with a NII Argon- designed Ts100 digital computer.

The N019 radar weighs around 385kg in total. It is a pulse-doppler radar operating in X band around 3cm wavelength. It uses three basic operating regimes. High PRF radar mode for optimal detection of closing targets, medium PRF mode for optimal detection of receding targets, and an interleaved high/medium PRF mode for all aspect detection. It uses a guard channel for sidelobe suppression. SARH Illumination and main channels use different frequencies within the X band, and are multiplexed in time. Individual aircraft can be preset on the ground to different frequencies to avoid mutual interference during group operations. Scanning cycle times are 2.5-5 seconds depending on mode. Beam width is 3.5º, which determines the minimum separation of two targets in azimuth. The radar beam is stabilised up to 120º in roll and +40º/-30º in pitch. N019 is a hybrid analogue/digital design, with an NII Argon Ts100 digital processing unit. The Ts100 processor can achieve 170,000 operations per second, has 8K RAM and 136k ROM, and is built using medium scale integration ICs. It is based on the proprietary POISK architecture developed at NII Argon, which allows adapting of the instruction set to control system functions by expanding the basic instruction set with microcodes inherent in specific tasks. Compared to machines using the same elements but a generic instruction set (e.g. the ES EVM architecture Argon-15A of the MiG-31) processing capability was enhanced by 1.5 to 2.5 times and the code 3 to 5 times more compact, making Ts100 much cheaper to produce. The Ts100 computer weighs 32 kg. 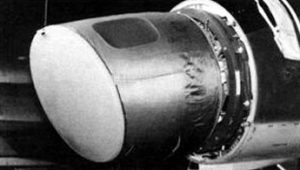 Encounter mode is the main search mode used in interception, as it gives the longest detection ranges and the least false returns. It uses a High PRF mode which can detect closing targets only in the velocity range of 230 – 2500km/h at altitudes from 30m to 23,000m. The display is calibrated to a maximum range of 150km. Target can be up to 10,000m above or 6,000m below the host aircraft’s own altitude. A typical 3 sq m RCS fighter target can be detected at 50-70 km and tracked at 40-60 km. If the target is flying below 3,000m reduces the detection range to 40-70 km and tracking range to 30-60km. Two basic scan patterns are used. When the system is under direct GCI control via datalink, a 6 bar elevation raster scan is used. This scan covers a sector of 40 degrees in azimuth at ranges up to 30km, 30 degrees at ranges of 30-55 km, and 20 degrees above 55km within the scan limits given above. The distance to target and other useful information is supplied by GCI command, and the direction of the scan is automatically cued by CGI command towards the desired target. When the system is not under direct GCI control via datalink, a 4 bar raster scan mode is used to acquire a target manually. This mode scans a constant 50 degrees in azimuth, with the pilot controlling the direction of the scan. It is expected that the rough direction to the target will be given by ground control via voice commands. There is no scan pattern for full azimuth range scanning. The 130º scan area is divided into 3 sectors. Left sector is -65º to -15º, centre sector covers -25º to +25º, right sector from +15º to +65º, giving overlapping coverage of the full 130º scan limits. Individual targets can be resolved providing they are separated in azimuth and 5-6km in range. Range measuring error of a single target can be as high as 8km, which should be recalled when comparing measured target range with that supplied by GCI controller. Minimum measurable range in this mode is 5km. Lockon and transition to tracking mode takes 2 to 7 seconds in Encounter mode. Note that in Encounter mode, a target that changes direction to a tail-on engagement may be be lost even when in tracking mode, if it is no longer closing.

A medium PRF mode usable for both headon and tailchase engagements. In practise it is used only when necessary, as it is prone to displaying false targets from ground clutter especially at low altitudes. Marsh land, marshy forests and flood plains give greatest clutter problems. When multiple false returns are present, the pilot should compare visible targets with the calculated target range supplied by datalink from GCI controller to determine the correct target. Display is calibrated to a maximum range of 50km. Detects targets from 30 m to 23,000 m altitude receding at speeds of 210 – 2200 km/h. Target can be up to 10,000m above or 6,000 m below. Range against a typical 3 sq m RCS fighter target is 25-35km search and 20-35km tracking when host aircraft is flying above 3000m. When flying from 1000m to 3000m altitude, range is reduced to 20-35km search and 18-35km track. When flying at 500-1000m achievable range is just 15-30km search and 13-25km tracking. When target range is below 20km, scan coverage is 40º in azimuth, 16.5º in elevation. If target range is above 20km, scan coverage is 30º in azimuth, 13.5º in elevation. Individual targets can be resolved providing they are separated 3-4km in range in Pursuit mode. Errors in range measurement can be as high as 8km, but there is no minimum range. Lockon and transition to tracking mode takes 1-4 seconds in Pursuit mode. When “Cooperation” mode is selected, the radar is automatically switched to an equivalent mode to pursuit, scanning with the IRST. 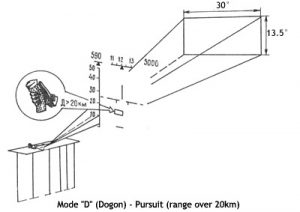 Information on this mode is not available. It is believed to be a high PRF mode similar to Encounter mode, only available on Soviet standard machines, with better ECCM capabilities.

Close Combat mode overrides all other modes. It uses a + 37º/ -13º fixed directly ahead vertical scan that is 6º wide (2 scan lines) with a 2.5 sec scan cycle and provides semiautomatic target acquisition. The closest target present in the scan area will be locked when pressing the lockon button without having to designate it. Close Combat mode can lockon from 450 m to 10km in range, and track a locked on target down to 250m. It is not slewable but fixed ahead only. Targets can be tracked in a closure rate range from +300 meters/second to -500 meters/second including co-speed targets. Lockon and transition to tracking mode takes 1-2 seconds in Close Combat mode 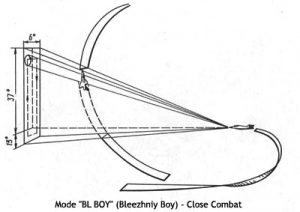 Track-While-Flyby submode can be set in Encounter or Pursuit modes only.
Track-while-flyby mode allows the simultaneous tracking of up to 10 targets, measuring their angular position, range and rate of closure. The target with the highest rate of closure/range ratio is designated the most dangerous, and automatically marked on the display. The pilot can override the automatic selection if he decides on another target. After switching to track-while-flyby mode volume scanning is stopped, and only the (up to 10) tracked targets are followed. Track-while-flyby mode will automatically follow the target marked most dangerous (auto or by pilot override) in elevation without pilot intervention. The TSVM computer calculates missile launch parameters for the most dangerous target. As the range to target approaches the calculated maximum missile launch range, the radar will stop scanning for targets and transition to an 8º by 40º box pattern scan in the direction of the designated target. If the target is located, the radar will transition to single target tracking mode, and all other contacts are discarded. If no target is found within 3 cycles, the radar returns to scanning mode and contacts are restored. Track-while-flyby mode is intended to allow missile launch at maximum range with minimal warning to the target, by switching to single target tracking mode as late as possible.

Automatic mode uses a mixture of High and Medium PRF to give optimal all aspect detection. Each line of the scan is alternated between high and medium PRF, unless range is under 10km when only medium PRF is used. It generates a display calibrated to a maximum range of 100km. Targets can be theoretically detected at similar ranges to Encounter and Pursuit modes according to target direction. In Automatic mode tracking of a target should continue regardless of target direction provided rate of closure/opening is sufficiently high. It is considered by pilots to be quite problematic, overloading the data computer and generating numerous false returns. It is primarily intended for use when lacking information from the ground station concerning the target’s direction. Track-while-flyby submode is not available in AVT mode.
N-019 is the USSR standard model.

N019M Topaz is an updated version, developed as a response to the compromise of the N-019 radar by a US spy. Tested from 1986, it entered limited production in 1991. Slightly lighter than the N-019 at 350kg. Topaz has increased ECM resistance, new software, and a more advanced built-in monitoring system. A new Ts101M computer eliminates the processor overload problems of the N019, more than doubling capacity to 400,000 operations per second whilst weighing less, just 19kg, and with doubled MTBF of 1000h compared to the 500h of the Ts100. N019M allows two targets to be engaged by active radar homing missiles simultaneously. Range increased slightly to 80km. Originally intended to be fitted to the existing MiG-29 fleet as an upgrade, about 22 aircraft with N019M are thought to have entered service with the VVS.

N019ME Topaz Export version of Topaz, slightly downgraded. All Indian MiG-29s have been upgraded to this standard.

N019MP is a further modified radar proposed by Phazotron for the MiG-29SMT program. It used a Baguet series processor. The maximum range remained the about the same, but the radar could detect 20 targets simultaneously, track four, and engage two. The radar had also basic air-to-ground functions, like ground mapping mode, acquisition and engagement of sea targets with radar homing missiles, and ground targets with unguided weaponry under any weather conditions, day and night. The NO19MP could generate maps of 15×15, 24×24, 50×50 or 77x77km with a resolution of 15m. Radar imagery could be transmitted via datalink to GCI centres or A-50 AWACS aircraft. Targets visible on the radar map could be designated by the pilot(using a joystick) or ground controller, and used to cue TV-guided missile seekers, whose higher resolution imagery can then be displayed or transmitted to the GCI or A-50 controller as well. Performance against slow flying helicopters was improved as well as resistance to jamming. Uses Doppler beam sharpening techniques. Now superceded by N019M1.

N019M1 This latest radar upgrade proposal from Phazotron retains the antenna and transmitter block assemblies but replaces pretty much all the rest of the radar. It introduces new fully programmable digital processing, giving 30-50% greater range in air-to-air search and track. Greatly improved true Track-while-scan mode, with the ability to continue volume search for new targets while tracking 10. 4 targets can engaged at once with R-77 missiles. 4 different close combat modes are available. Has raid assessment mode, and target class recognition. Air to surface modes include Real beam, DBS, SAR (5x5m), and moving target detection. Can handoff target data to the Kh-31A/Kh-35A anti-shipping missiles. Allows target handoff to TV guided weapons. Collision alarm system. It is being touted as a low cost upgrade for existing MiG-29 operators.