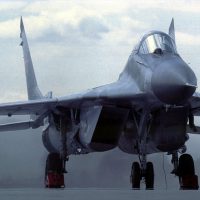 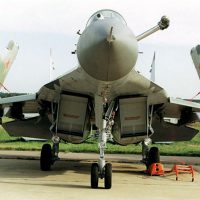 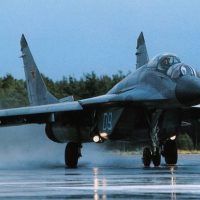 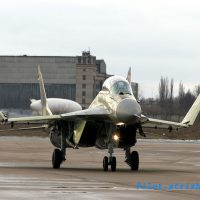 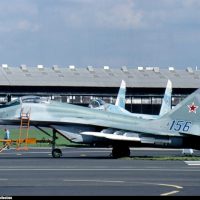 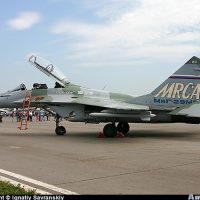 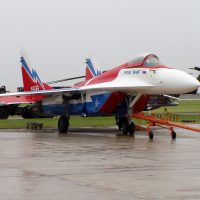 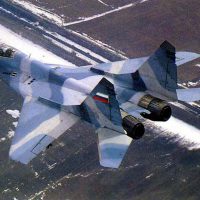 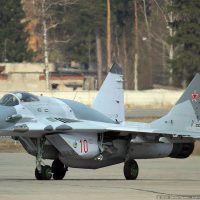 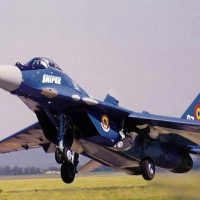 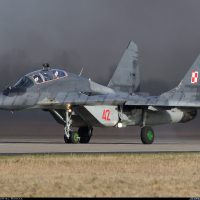 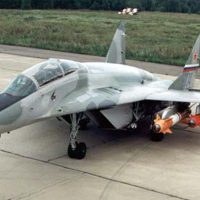 Version lacking nuclear weapon delivery system, and with OEPrNK-29E electro-optical complex and downgraded IFF, for non-Soviet Warsaw Pact air forces. RLPK-29E (N-019E or N-019EA ‘Rubin’) radar may also have lacked two modes, giving total of only three. Produced between 1988 and 1991 for Bulgaria, Czechoslovakia, East Germany, Poland and Romania. Most modified to virtual 9.12B configuration (with removal of datalink and IFF) on break-up of USSR and Warsaw Pact. 9.12A/MiG-29A designation originally applied to unbuilt interim aircraft with S-23 radar, cancelled in 1976. (Prototype and preseries aircraft numbered 905 to 907 and 909 to 916.) 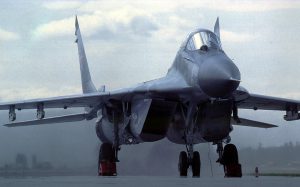 Downgraded version for non-Warsaw Pact export customers. Lacked Laszlo datalink. Built from 1986. Avionics include N-019EB radar, OEPrNK-29E2 EO complex, L006LM/101 RHAWS and further reduced-capability IFF and ECM. MiG-29 (DASA upgrade): Aircraft modified to allow operation within NATO air defence structure. MiG Aircraft Product Support GmbH founded 27 July 1993 as joint venture between Rosvooruzheniye, MAPO ‘MIG’ (now RSK ‘MiG’) and (then) Daimler-Benz Aerospace for D-level maintenance and modernisation of German MiG-29s. Western IFF, V/UHF, emergency radio, NATO standard units, Tacan and anti-collision lights installed first followed by GPS (on seven aircraft). These two modernisations ICAO I and ICAO II together form Level One. This followed by provision for underwing fuel tanks, extended airframe TBO (from 800 FH or 9 years to 1,300 FH or 15 years) and engine TBO and life (Level Two). Similar upgrade offered to other MiG-29 users, especially in Europe. Parallel upgrade, with Honeywell KLU-709 Tacan or surplus Luftwaffe AN/ARN-118 (instead of new AN/ARN-153), as well as ILS/VOR and Trimble 2101 I/O Plus GPS, R-865 VHF and new anti-collision lights, being applied to eight Polish MiG-29s (67, 70, 89, 105, 108, 111, 114 and 115) by WZL-2 depot at Bydgoscz, in association with MAPS joint venture. Polish upgraded aircraft have a new F-16A (ADF)-type SB-14 IFF antenna ahead of windscreen and received a new, darker two-tone grey camouflage. Remaining Polish aircraft will probably follow and MAPS has signed a teaming agreement for further work with WZL-2 in 1999, perhaps with further improvements, including ‘glass cockpit’. DASA signed MoUs with Bulgaria and Romania in October and November 1999 and opened negotiations with Hungary (including the Danubian Aircraft Company at Tököl) in May 2000. A contract for the upgrade of 14 MiG-29s was signed in August 2000 but was overtaken by a decision to lease F-16s in early 2001. Bulgaria’s MiG-29s will also receive a 1,100-hour/nine-year service life extension at the hands of DASA and TEREM, while DASA also has an agreement with Slovakia’s LOT. No customers have yet been found for DASA’s proposed Level Three upgrade (adding a MIL-STD-1553B databus, LINS/GPS and new IFF, navigation and communications systems) or for the planned Level Four, with a new radar, CDPU, and ECM. MiG-29 (EADS/Aerostar/Elbit ‘Sniper’ upgrade): Following an initial life extension programme on two MiG-29s and two MiG-29UBs, to Level Two standards, Aerostar has teamed with DASA to offer the Romanian Air Force a MiG-29 upgrade which would add most of the same avionics items as were applied to the air arm’s MiG-21s under the Lancer upgrade. This would build on the existing EADS NATO compatibility upgrade and life extension, and would use an avionics package supplied and integrated by Elbit, including a modular multirole mission computer linked to a MIL-STD-1553B digital databus, full HOTAS functionality, a second stripped-down Litton Italiana INS integrated with Trimble GPS and a new air data computer, a new Elop wide-angle HUD and two digital colour MFDs with a choice of metric or Imperial units, and with a new up-front controller. New Israeli Elisra SPS-20 RHAWS and compatibility with Western weapons. This upgrade may then be offered to other MiG-29 operators. The prototype (32367, donated by the Romanian Air Force) made its maiden flight on 5 May 2000, and was flown to Berlin for static display at ILA 2000, after completing a 15-flight test programme, on 26 May. Upgrade may be expanded to include an Elta EL/M-2032 pulse Doppler radar, as used by the Lancer-C. A decision by the Romanian Air Force is expected in 2002 or 2003. 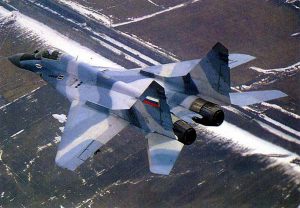 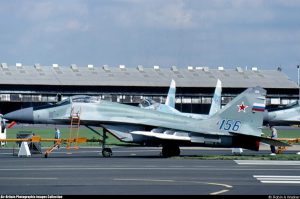 Export version of MiG-29M, with same weapons and equipment but with first-generation WCS based on N-019ME radar of MiG-29SD/SE. Redesignated MiG-33, but no longer being promoted. 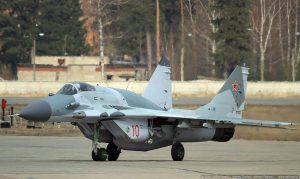 Further upgrades to the SMT are already planned or on offer, under provisional designation MiG-29SMT-II. Improvements include frontal RCS reduction measures, IR signature reduction and further increases in fuel tankage and warload. Fuel capacity to be increased to 5,600 kg (12,346 lb) through installation of new 219 litre (58.0 US gallon; 48.0 Imp gallon) tanks in LERX, replacing auxiliary air intakes and ducts, as in MiG-29M and original SMT scheme. Eight hardpoint wing (either based on MiG-29M, with broad span ailerons, or merely rebuilt standard wing) will allow warload increase to 5,500 kg (12,125 lb). Potential avionics improvements include new radar (N010, Zhuk, Zhuk PH or NIIR Zemchug). Some expect future MiG-29 variants to receive a new engine, the VK-10M, being developed by Klimov for production from 2010, with a thrust of 108 to 113 kN (24,250 to 23,350 lb st). Thrust vectoring may be offered. May use triple redundant digital FBW FCS developed for MiG-29M. 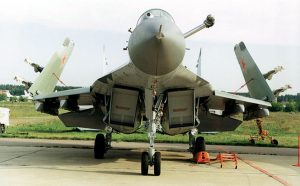 The original MiG-29SMTK (effectively a MiG-29SMT with the 9.31’s folding wing and landing gear), previously offered to India along with the former helicopter carrier Admiral Gorshkov, is understood to have been replaced by a new, multirole, carrierborne variant based more closely on the MiG-29K/M, albeit without the expensive Al-Li alloys. With a MIL-STD-1553B-type bus and open systems avionics architecture, the MiG-29K-2002 is compatible with a wide range of Russian and Western weapons, and may feature the colour displays and GPS-based navigation system of the MiG-29SMT. This variant, possibly designated MiG-29 MTK, is claimed to be able to perform 90 per cent of its missions with a 10 kt (18 km/h; 11 mph) wind-over-deck, even in tropical conditions using new autothrottle. One notable feature of the new aircraft is its much-reduced folded span of 5.80 m (19 ft 0¼ in), achieved by positioning the fold line much closer in to the wing-root, and by adding upward-folding tailplanes. The aircraft can also fold its radome (up and back), reducing overall length to 14.13 m (46 ft 4¼ in). Accordingly, Admiral Gorshkov can carry a full air wing of 24 MiG-29Ks (plus six helicopters), or (according to some sources) as many as 30.

upgrade configuration could add a computer upgrade and additional electro-optic, radar, IIR and recce pods, together with take-off performance improvements. In December 1999, it was reported that India had selected the MiG-29K for use aboard Admiral Gorshkov, and an initial order for 50 aircraft. 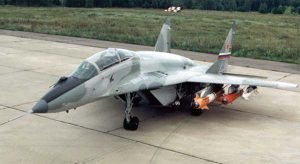 Private venture programme funded by OKB, consisting of virtual SMT upgrade (increased fuel in enlarged spine, in-flight refuelling capability glass cockpit and enhanced avionics) for UB trainer. This transforms UB into operationally capable two-seat multirole fighter, with potential for Su-24 replacement or for “pathfinder” use. Expected to be fitted with a millimetre wave terrain-avoidance radar and Osa-2 X-band, phased-array centimetric air-to-air/air-to-ground radar, or with Thomson-CSF RC 400 radar in nose and missile launch and trajectory control system in wingroots. Full dual controls retained in rear cockpit, but augmented by large CRT display screen optimised for display of FLIR or video imagery; WSO would be a rated pilot who could take control if captain incapacitated. Long-serving demonstrator (08134 “304”) converted to UBT demonstrator/prototype making type’s Western debut at 1998 Farnborough Air Show, after only five test flights in new configuration, having first flown on 25 August 1998. First production conversion 25982 “952”, with folding refuelling probe, shown at Paris in June 1999. A further-upgraded aircraft, with four-pylon wings, refuelling probe and OSA-2, is expected to fly in mid-2000 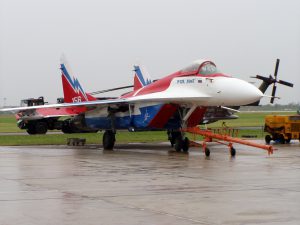 MIG-29 version with 3-d thrust-vectoring nozzles. A fully representative prototype is due to fly by the year-end or early 2002. The nozzles installed on MIG-29OVT can move in any direction over the rear hemisphere at any range of engine operation, offering the aircraft astounding manoeuverability. Fire-control system including, Phazotron Zhuk-M radar and the full range of air-to-air and air-to-surface missiles, including the R-77 air-to-air missile and the KH-31 and KH-35 air-to-surface missiles.

The upgraded MiG-29 SNIPER was first demonstrated in Berlin- ILA 2000 and Timisoara Air Shows . The SNIPER maiden flight on 5th May 2000 demonstrated that the cooperation between Daimler Chrysler Aerospace (now EADS), AEROSTAR S.A. from Romania and ETBIT SYSTEM Ltd. from 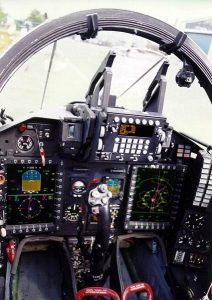 Israel was completely fruitful. The Parties utilized an aircraft that is used in the Romanian Air Force, extended the aircraft life and upgraded it with enhanced avionics.

While the upgraded aircraft complies with NATO/ICAO standards, the modified cockpit provides a modern Man-Machine Interface.