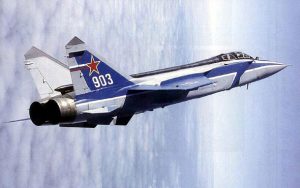 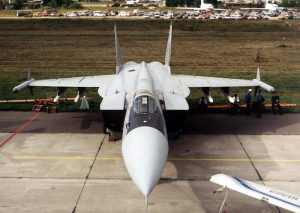 As one of the later models following a long line of successful Soviet- manufactured aircraft, the Mig-31 Foxhound is an all-weather interceptor plane which entered service in Russia possibly as early as 1976. Touted as the forerunner to the MiG-23, Su-15, and the MiG-25, the Foxhound “B” was endowed with the capacity for two fliers, supersonic velocity close to three times the speed of sound, dual turbofan afterburners, and folding wings. Its aerodynamic design includes a high degree of slope and twin outward cantered fins. As a highly-refined aircraft, the current versions of the MiG-31 have introduced many technical innovations to its various combat theatres. The complex electronically-scanned phased array-type Zaslon radar, along with its now-standard conical radome reside in the pointed front end of the plane. Also standard to MiGs are radar warning receivers and several antennae, capable of pursuing signals via VHF, the IFF system, and information drawn in through its vanes and yaws. The MiG’s arsenal is not spectacular in proportion to its contemporaries, yet it is equivalent. Attached to its pylons are the AA-8 Aphid K-60 and AA-9 R-33 air-to-air missiles, the latter known to the North American Treaty Organization as the “Amos”. R-40T Acrid medium-range infrared weapons as well as additional Amos missiles are housed on the plane’s exterior, with the now ever-present Gsh-6-23 six-barrel Gatling gun which fires 23-millimeter projectiles. Composition for the aircraft is of vital importance, especially when reaching high altitudes or rapidity. Devices on the craft to prevent the lethal accumulation of static are present, as well as tough, heavier alloys comprising 33 per cent of the makeup of the craft’s frame. Half of the skeleton of the plane is made of nickel, and another 16% of it consists of the light, durable, heat-resistant element, titanium. Russia’s Nizhny Novgorod facility, called by some American insiders “the fox works”, is the current producer of the craft, and reportedly 160 occupy CIS interceptor air forces.

Airframe 49 per cent arc-welded nickel steel, 16 per cent titanium, 33 per cent light alloy; 2 per cent composites, including radome; three-spar wings; no wingtip fairings or mountings; small forward-hinged airbrake under front of each intake trunk; undersurface of centre-fuselage not dished between engine ducts like MiG-25; much enlarged air intakes; jet nozzles extended rearward; shallow fairing extends forward from base of each fin leading-edge; fence above each wing in line with stores pylon.

Pilot and weapon systems operator in tandem under individual rearward-hinged canopies; rear canopy has only limited side glazing and blends into shallow dorsal spine fairing which extends to forward edge of jet nozzles. 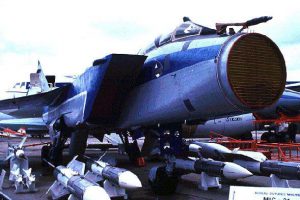 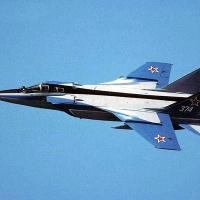 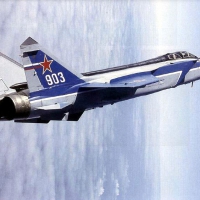 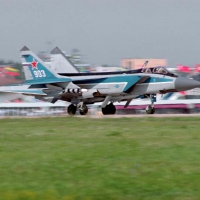 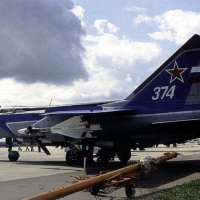 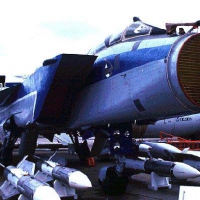 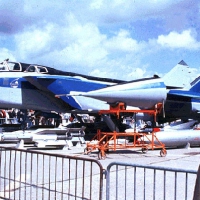 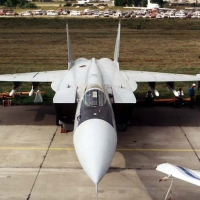 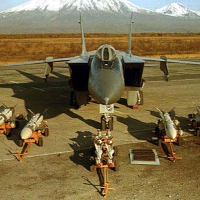 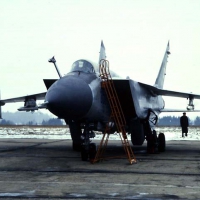 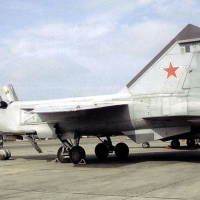 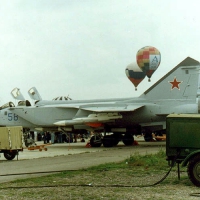 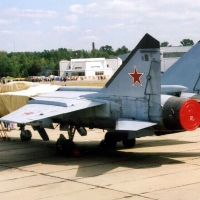 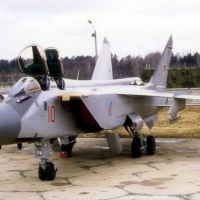 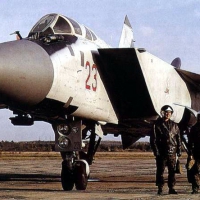 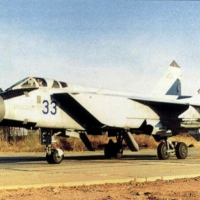 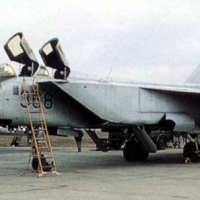 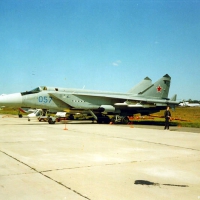 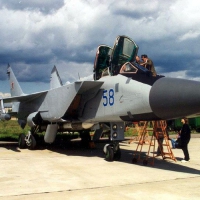 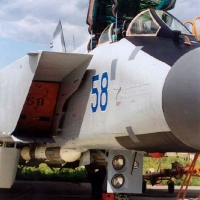 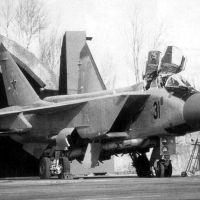