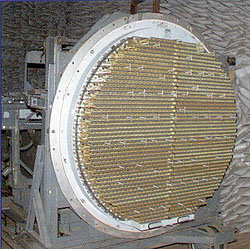 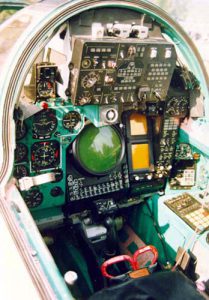 Zaslon was the first phased-array radar to enter service on a fighter aircraft. In 1968, Phazotron had been tasked with developing the radar for the future MiG-31. Engineers prepared two prototype units, dubbed Groza and Vikhr, both based on Sapfir-series technology. The final version was called Smerch-100, but the radar failed to meet requirements. As a result, in 1971 Phazotron was ordered to pass all the documentation to its consortium partner NIIP. The result was the Zaslon radar. The task was very difficult, since one of the main requirements was engaging cruise missiles, and the experienced Phazotron had failed to solve the problem of detecting small objects against ground clutter and tracking multiple targets simultaneously. Finally all the problems were solved, with lots of assistance from NPO Istok, who helped design the phased array, and Leninetz who were to build it, and the system finally reached service in December 1981. Zaslon is double the weight of the AWG-9, the largest US fighter radar.

The NIIP team believed that the advantages a phased-array radar gave in terms of near-instantaneous scanning and multitarget engagement capability (a typical mechanically-scanned antenna can take 12-14 seconds to complete a scan) were worth the weight and cost penalties. First tests of the radar were conducted in 1973, and it was first flown on a test aircraft in 1976. On February 15, 1978, a mission in which ten targets were detected and tracked was performed for the first time. In 1981, MiG-31 aircraft carrying the Zaslon radar entered service with the Air Defense aviation, and became fully operational in 1983. The 1.1m diameter phased array antenna weighs 300kg, the whole radar weighing in at 1000kg. Zaslon uses an Argon-15A computer (first airborne digital computer designed in USSR). 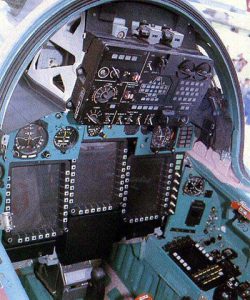 Zaslon operates in 9-9.5 GHz band. It detects and engages targets down to 25m, including cruise missiles. Maximum possible search range is 300km for a large airborne target.

Security of the Zaslon system was compromised by the US spy A Tolkachov. This lead to development of an updated version, fitted to MiG-31B from 1990, retrofitted to some earlier models during rebuilding to MiG-31BS standard. It had a new data processor, giving extended capabilities, longer range and better ECM resistance.

1.4m diameter antenna, 50% to 100% better performance than Zaslon. In April 1994 used with an R-37 to hit a target at 300km distance. Search range 400km versus a 20 sq m RCS target. Tracks 24 targets at once, engages 6. Supposedly able to engage launched Pershing-2 missiles in flight with long-range R-37 active radar-guided missiles. Project ended as no new MiG-31s will be built.

All MiG-31s remaining in service are supposed to have their radars upgraded to Zaslon-AM status by Leninets, according to a design put forward by NIIP that keeps the existing antenna while replacing the old Argon-15A processors with Baget series processors.